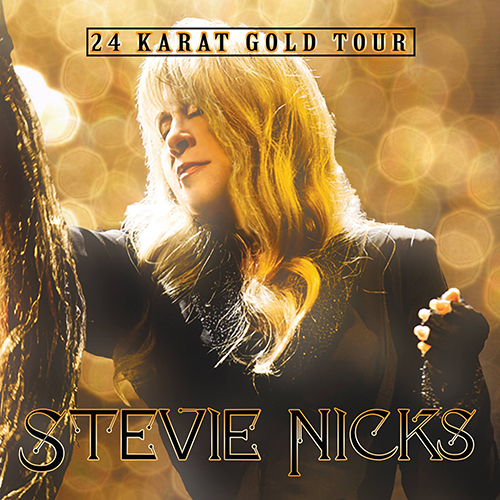 Stevie Nicks fans can relive her "24 Karat Gold Tour" with a special concert film, "Stevie Nicks 24 Karat Gold : The Concert", which will screen in theaters for 2 nights only this fall via Trafalgar Releasing.

Joe Thomas directed the film, which was recorded during Nicks’ 2017 stops in Indianapolis and Pittsburgh. Tickets will go on sale on September 23rd through the movie’s official site and screen on October 21st and 25th at select cinemas, drive-ins and exhibition spaces around the world. The film will also feature exclusive stories about both new and classic songs Nicks has written throughout both her solo career and as a member of Fleetwood Mac.

On October 30th, 2020, Nicks will release the accompanying live album as well in both physical and digital formats. The 2 CD version will be available exclusively at Target, while Barnes & Noble will be selling a crystal clear 2 LP vinyl version. A black vinyl version will be available at all other record retailers. The live version of Nicks’ Fleetwood Mac classic “Gypsy” from the concert film and album is streaming now.

“'The 24 Karat Gold Tour' was my all-time favorite tour”, Nicks says in a statement. “I not only got to sing my songs, but I was able to tell their stories for the 1st time. I love having the opportunity to share this concert with my fans”.

"The 24 Karat Gold Tour" began in late 2016 and was in support of Nicks’ 2014 solo album "24 Karat Gold : Songs From The Vault". The album featured new recordings of previously unreleased demos and songs Nicks had made between 1969 and 1987, although a couple come from the mid 90's.