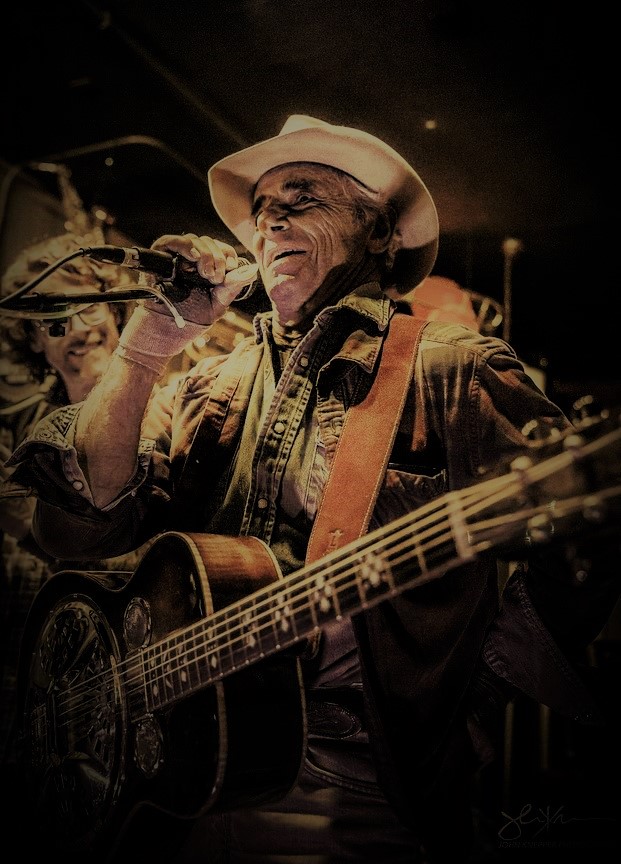 Born in 1950, Melvin Litton grew up on a creek bank farm and small town in Kansas. A straight arrow out of highschool, he entered the Air Force Academy in 1968 aiming to be a cold warrior astronaut. But gazing out a window late one evening in the cadet library, listening to “Sounds Of Silence” as the snow fell quiet on the darkened plain, he felt an urge enter his blood stronger than any dream of flying jet or rocket. Come Christmas he left the academy and with a wager won off a highschool buddy walked into a pawn shop and bought a $25 guitar. Within a month he’d written his 1st song and the following summer faced with dropping 150 bucks on a sweetheart’s diamond ring or a sunburst Gibson, he choose the guitar, lost the girl, soon found one better and kept on pickin’.

A few years on found him singing regularly in bars and he took the handle The Gothic Cowboy, drew up a poster, and rode solo as such over next 20 years through a maze of dead end gigs, hitting Canada, New England, Colorado, Nashville, and Austin, finally landing back in Kansas.

There, in his mid 40's, he formed The Border Band with guitarist Roger Holden and drummer Dave Melody. Again, over a 20 year jaunt they played their brand of rawhide rock and country blues through 100's of regional gigs, shifting through more bass players than a spider has legs, while putting out 5 CD's, all gaining fair notice on roots music sites and indie radio.

Trail weary by 2016, he retired the band determined to ride out his days once more solo as The Gothic Cowboy. But he soon teamed up Mando Dan Hermreck and together they put out a double disc called “Between The Wars” in 2019. Nearing his biblical span, he offers “Bare Bones”, a 4 disc set of homespun songs from his youth, subtitled “Chance, Folly, Desire & Dream”, and best described in the liners from the back cover.

“These songs, just vocal and guitar recorded, in 1978, 1979, 1981 and 1984, on a portable cassette, are remnants and revenants from my roaring 20's and dirty 30's, when it finally dawned on me that singin’ in bars would not feed my family and I’d need to hammer nails the rest of my days. But I done it ‘n did it with a few good days to spare and these songs laid down like jailhouse cards, off brand, crimped, scuffed, but there’s a full deck here. High cards ‘n low, cut ‘n deal ‘em anyway you like, one at a time or fan ‘em forth in play of chance, folly, desire, and dream. Mix ‘n shuffle, match a pair, make a full house, mayhap find you a flush, for sure a worn ace or lowly deuce. And you can bet there’s a joker or two in the bunch. So ante up, all you gotta do is hit ‘play’ to conjure the whisperings of 'Bare Bones'."

Previous Next
More about The Gothic Cowboy
Next