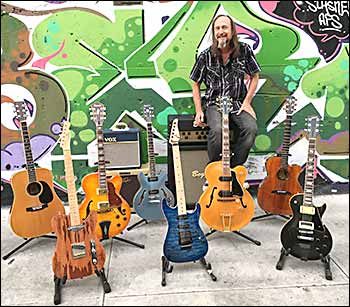 New York City has long been a place to inspire artists. Countless 1000’s have tried to claw their way up a slippery slope trying to get some kind of recognition in a city that sets the highest standards for artists, yet also puts up roadblocks at every turn. For over 20 years, under the somewhat international sounding moniker, Zan Zone, songwriter and guitarist Zan Burnham has been putting together various musical endeavors in that city, releasing 3 albums and 2 EP's. Recognition has been slow, yet, still positive. As many have observed, overnight success usually takes years, or decades.

Back in 1995, Zan Zone released 1st CD, "Zan Zone", to critical acclaim. The Musician's Exchange called the eponymous album, "Way cool, truly an original CD, the playing is first rate and so are the grooves and songs, it's wonderful and a definite keeper”. Time And A Word said, "This very cool little album is an impressive debut disc". The Music Paper noted its variety and excellent production. Performing Songwriter said that Zan Zone "has something to say", and Rockline's Guinnevere simply stated that, "this is one of the best CD's I've reviewed. The music is solid, the vocals are great, and I think everyone should check them out".

Together since the early 1990’s, the band found that a few years after the album was released, incipient marriages and babies caused the band to splinter and re-group a few times. While a 3 song EP was released in 1997, the pressures of everyone’s family lives finally put a halt to that version of the group in 1998. Zan continued to practice and write music while gut renovating a 100 year old house in Brooklyn, New York, where he currently lives.

In 2005, he finally released a 2nd Zan Zone EP, 2005's all solo, "Watching The World". He followed that in 2009 with an all acoustic CD, "Time And Materials", which was recorded with a trio that, unfortunately, barely stayed together for 2 years.

Regrouping, in 2013, Zan Zone released the double album length project, "Shorts". The 73 minute project utilized 19 musicians and singers, recording 13 songs over a 3 year period. Critics responded, calling it, "inventive, funny, infectious, intelligent, catchy”, "an unprecedented cornucopia of various musical styles, designed for people who are interested in the unusual and enjoy looking outside of the box", “an album with very clever songs that deserve to reach a wider audience". At least some folks got it…..

Now, in 2018, Zan Zone is releasing ”It’s Only Natural”, a true rock’n’roll record in the tradition of many of the great classic rock bands. This is rock you can dance to, sing to and still rock out. It will groove you and move you. ”It’s Only Natural". Remember when rock was great? Now, it’s great again!