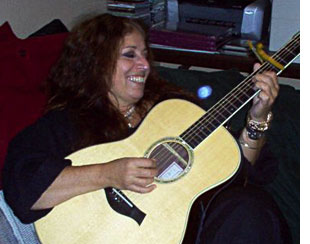 Wendy Waldman is a critically acclaimed recording artist, as well as a writer of multi-platinum songs for other singers in musical genres ranging from country to pop, film, jazz, children's music and R&B. She is one of the first woman record producers to have a major impact in the music industry. Wendy Waldman's career in the music business started with her band, Bryndle, in the early 1970s in Los Angeles. Bryndle was made up of Wendy Waldman and her friends Karla Bonoff, Kenny Edwards, and Andrew Gold.

Waldman's solo career had an auspicious beginning. The first Wendy Waldman album, "Love Has Got Me," was released by Warner Bros. Records in 1973 and proclaimed by Rolling Stone Magazine to be the "singer-songwriter debut of the year." She has made eight critically acclaimed solo albums and toured extensively as well. In 1996, a "best of" collection was released on Warner Brothers, followed by the reissue of all of the Warner albums in 2005.

More than 70 other artists have recorded her songs in fields as diverse as pop, R&B, jazz, country, film, Latin and cowboy music. Among her biggest records are "Save The Best For Last" and "The Sweetest Days" by Vanessa Williams; "Fishin' In The Dark" and "Home Again In My Heart" by the Dirt Band; "Baby What About You" by Crystal Gayle; "I Owe You One" by Aaron Neville; "Heartbeat" by Don Johnson, "I'm Gone" by Alison Krauss, and most recently, "Fishin in the Dark," released on Garth Brooks' new box set.

Waldman produced the last New Grass Revival album, "Friday Night in America," considered a tour de force in the acoustic music world. In recent years she has focused on producing independent artists, among them Ronny Cox, Brian Joseph, John Cowan, Arthur Lee Land, Anna Wolfe, Katy Moffatt and Rosie Flores, and has coproduced all three of the Bryndle cds which have been recorded since 1995. The most recent project is a live acoustic album for the Los Angeles based rock band Hypnogaja, and she is currently in the studio with the legendary folk/jazz artists Artie Traum. After many years, a new Wendy Waldman cd is finished and will be released in the summer of 2006.

Waldman is the only female musician in the Taylor Guitars clinician program and is in demand for her songwriting workshops/performances. She also tours extensively as a solo artist and in combination with other friends, all across the country and in all kinds of venues.

As a true veteran of the music industry, Wendy Waldman imparts a sense of great joy and passion about all aspects of music making.