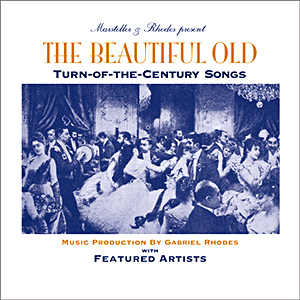 Producers Paul Marsteller and Gabriel Rhodes invite you back into the parlor with “The Beautiful Old”, an entertaining collection of elegant yet earthy songs, ranging from 1823’s 'Home Sweet Home' to 1918’s 'Till We Meet Again'. “The Beautiful Old” keeps the piano, often played by The Band’s Garth Hudson, at the heart of each arrangement, illustrating the original spirit of the compositions brought back to life with such illustrious vocalists as Richard Thompson, Christine Collister, Dave Davies (The Kinks), Graham Parker, Kimmie Rhodes, Kim Richey, Heidi Talbot, Jimmy LaFave, Eric Bibb and more.

The stories behind the songs reflect changing times for music and popular culture: 'After The Ball' became the first song in history to sell a million copies of sheet music (and went on to sell 5 million!) and was the beginning of what became known as Tin Pan Alley; 'Come Josephine In My Flying Machine' is a fun take on the new invention of air-flight; 'The Dying Californian' is based on a farewell letter written at sea in the Gold Rush era; 'The Flying Trapeze' is a comic-tragic account of French acrobat Jules Leotard, who also designed the one-piece garment that bears his name.

These antique tales illuminate the past, but along with the other songs on “The Beautiful Old”, reflect timeless subjects of loss and regret, comforts of home, wistful loneliness, heartbreak and the joys of love as the sweetest song of all.