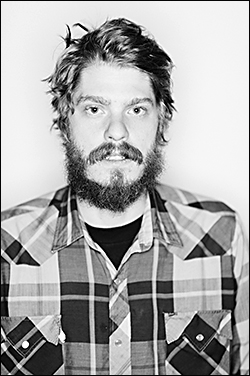 A lot of modern music is like bad plumbing, the more they overthink it, make it more complex than it needs to be, the easier it is to plug up the drain. Good music should thrust a fist into the core of who you are and pull out handfuls of simple, messy truth. This idea of getting to the heart of simplicity in a song, in melody and in meaning, in order to move the heart of a person, has been Ryan Boldt’s legacy thus far.

Boldt is the lead singer and songwriter in The Deep Dark Woods, crafting beautiful, intimate songs that are steeped in traditions found in places like English folk music, country blues, and 60's r'n'b. He was born on the vast prairie, in Saskatoon, Saskatchewan, but moved to Chemainus, British Columbia, when he was 19, where he started writing songs. It’s worth noting that the name Chemainus comes from the native shaman and prophet Tsa-meeun-is, which means ‘broken chest.’ The legend says that the prophet survived a massive wound in his chest to become a powerful chief. And while people often equate the music of The Deep Dark Woods with a prairie sound, it was in Chemainus that Boldt truly cracked open his chest to bleed out his first songs. Then, in the summer of 2005, Boldt moved back to Saskatoon to form The Deep Dark Woods.

It’s been almost 10 years since the band formed, and it wouldn’t be hyperbole to say that The Deep Dark Woods are one of the most successful bands to have risen from the dust of the middle of nowhere on the prairie. After 5 albums and extensive tours across Canada, the US and Europe, accolades for the band have piled up. They’ve been nominated for a Juno as well for songwriter of the year at The Western Canadian Music Awards. They won two Canadian Folk Music Awards and two WCMAs for Group of the Year. They were nominated for Best New Group alongside Alabama Shakes and Dawes at the 2012 Americana Music Awards, and played the award show at the Ryman Auditorium.

Speaking of playing live, aside from travelling around the world, they’ve played most of the major Canadian Folk Festivals, as well as Bonnaroo, The Newport Folk Festival and the Austin City Limits Fest. The Deep Dark Woods have opened for Merle Haggard, Blue Rodeo, Robert Earl Keen, and Further, which features members of The Grateful Dead. Boldt himself played a show with Phil Lesh from The Grateful Dead in Lesh’s Terrapin Family Band last May.

Boldt’s living in Victoria these days, having just completed a new solo project called ‘Broadside Ballads,’ which finds him continuing to dig through the past to create spellbinding music for the present. He’s driven by influences like Shirley Collins, Ian & Sylvia Tyson, Bob Dylan and the Stanley Brothers, but even as he mines the past, he’s not trying to contemporize these sounds. He just happens to be making newly recorded music in the same vein, the way they used to make it, before the world got so fast and cluttered. Warm. Intimate. Haunting. Like a punch to the gut. With a stunning, heart-stopping simplicity that cuts to the core of a person.