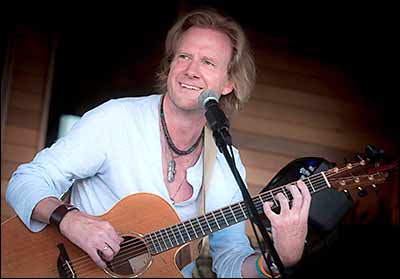 Rupert Wates was born in London and has been based, since 2007, in New York City and Colorado. He averages 120 live shows a year, in every state in the US, in Canada and Europe. He has won well over 30 songwriting and performing awards. In the last 3 years alone, 2 tribute albums to his material have been recorded, ‘Crazy Puzzle’ in 2015, by Nashville based performer Roxie Rogers, and ‘Wide Open Heart’ in 2017, by Los Angeles vocalist Susan Kohler.

Rupert Wates’s 9th solo album takes an unflinching look at the dangers, disillusionments and cruelties of today’s world, in which "The Lights Of Paris" offer a symbol of love, beauty and hope. On this disc, Wates’s signature sound has been reduced to the essentials of his voice and distinctive fingerstyle guitar, with color added by virtuoso musicians Adrianna Mateo, violin, and Brian Sanders, cello, in string arrangements by Grammy nominated John Guari. To preserve the warmth and spontaneity of a live performance, the album was recorded live in the studio in just 2 days. Singing with the voice of the timeless balladeer, Wates takes us song by song on a journey through the shadows that threaten to engulf us, towards the faint but still glowing lights.