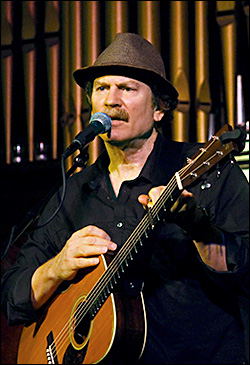 On “Prophets On The Boulevard” master storyteller Rob McHale takes you on a walk through the Boston Common, up to a mountain top in West Virginia, to a street corner prophet helping the downtrodden, and on a stroll in an historic small town along main street.

Woody Guthrie leaves us with an inspiration to make the world a better place in “Woody’s Shoes“ as Mother Jones is too late to stop a movement on “Blair Mountain”. Folk songs with a dash of roots and contemporary bluegrass influence make observations about ourselves and our world.

Recorded in the North Carolina mountains with producer Chris Rosser, Rob and his bandmates returned for a balanced album featuring social commentary, history and love. Massachusetts artists Mark Mandeville and Raianne Richards made contributions along with Rob’s brother Pat featured on the harmonica, and a few other musical friends.

Rob has been performing in the southeast and internationally sharing stories about some of our greatest folk legends at a range of venues, from historical societies and libraries, to telling the Tom Dooley Legend at the grave of Laura Foster during the Happy Valley Fiddler’s Convention.