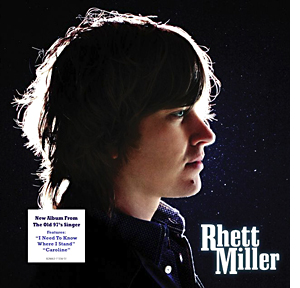 Critically acclaimed singer-songwriter and Old 97’s front man Rhett Miller releases his fourth solo album on Danny Goldberg’s Serial Lady Killer Records. The self-titled album will thrill fans with an up-close and personal journey through Miller’s dark heart and complicated mind – all set to the kind of rollicking tunes for which he’s known. The album is the darkest of Miller’s deep catalogue of releases and is a personal triumph both lyrically and sonically.

“My approach to songwriting has always been to take a heavy subject and put it to a bouncy tune. This record takes that trick to the next level.” Miller says. “Don’t get me wrong, there are some rays of sunshine on the album, but there is a lot of deep night.” He explains further, “The death of my grandmother, the suicide of my hero, David Foster Wallace. In my head, I was sort of in a dark place when I made this record.” Laughing, he adds, “It’s still a fun record to listen to. It’s a fine line you gotta walk, right?”

Miller penned all the songs on the record with the exception of “If It’s Not Love” which was co-written with Matt Scannell. "Rhett Miller" was produced by Salim Nourallah, who also produced the latest critically acclaimed Old 97’s release, "Blame It On Gravity". The exciting new 12-song set also features multi-instrumentalist and producer Jon Brion on guitar and bass, The Apples In Stereo’s John Dufilho on drums and Billy Harvey on guitar. While speaking to Billboard Magazine about the album, Miller states “Every musician I hired was a producer. All these people could have easily produced this record themselves.” While the album was initially planned a stripped-down, acoustic record, with the help of his stellar backing band, it quickly turned into one of huge sonic scope.

Of the album’s most rocking track, Miller says, “Happy Birthday Don’t Die” came to me in a fevered rush the morning before I headed to Texas to make the record. The whole story was there in my head when I woke up. This weird sci-fi portrait of a little old lady buried in the catacombs of some colony planet celebrating her one-hundredth birthday by dying. Writing that song was like speaking in tongues, very strange.” Not all the songs on the album are so far-flung, “ ‘Sometimes’ came out of hearing my two-year old daughter singing to herself in her crib one morning. I took her little tune and fleshed it out into first a chorus and then a whole song.” Elsewhere on the album, one finds the quirky details that are a hallmark of Miller’s songwriting. The “comedy club” in “I Need To Know Where I Stand” sounds suspiciously similar to LA’s famed Cafe Largo where Miller has played regularly over the years. In the same song, we find “the hamlet of Wallkill,” a town in the Hudson Valley near where the song’s author resides. But it’s the simple statements of grand truths that set this album apart from Miller’s earlier work. Take, for instance, the following line from “Like Love.” “We are all alone in this world / from cradle to grave / and maybe after that.” A bitter little sentiment, but dropped into the middle of a fun, foot-stomper of a song, it’s a testament to the years Rhett Miller has spent honing his craft.

While maintaining his career with the Old 97’s, Austin-born Rhett Miller has also released three previous solo albums, "Mythologies", recorded during his junior year in high school and produced by future Old 97’s co-founder, Murry Hammond, in 1989, 2002’s "The Instigator", and "The Believer" in 2006. While based in Dallas, Miller and Hammond formed Old 97’s in 1993. With their effortless combination of rock, power-pop and country, the band quickly became one of the most acclaimed and beloved bands to spring from the 90s indie rock scene. They have released seven powerhouse studio albums to date.