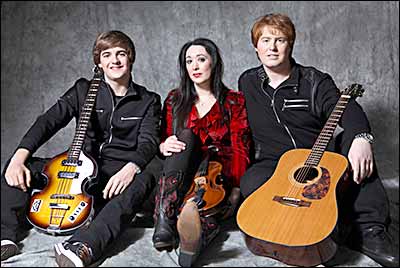 With many musical accomplishments individually, Brittany Jones and Mitchell Lane met while attending the University Of North Carolina School Of The Arts in Winston Salem, NC. Not limited to one style of music, they discovered their shared interest in many different genres alongside classical music. From singing opera and playing the pipe organ to singing folk and country songs with a guitar and a fiddle, Mitchell and Brittany have been collaborating musically since they first met.

Upon graduating with her master’s degree in organ performance in 2011, Brittany decided to continue her education in bluegrass, old time, country, and celtic music at East Tennessee State University. While Mitchell continued pursuing his degree in vocal performance, he decided to learn the acoustic guitar in order to accompany Brittany at her program’s audition.

Together, their musical training has aided them in grasping the detail and sensitivity in music, and it enables them to effectively present those nuances on stage and in the studio. “Just like in classical music, there is an important historical component to folk music and we were immediately drawn to it. After graduating college in 2013, forming Raven and Red was our natural calling as performing musicians”, Mitchell recalls.

To round out the group, Cole King, Mitchell’s youngest brother and current 11th grade student at Woodward Academy in Atlanta, GA, joined the duo on mandolin and fill out the group’s 3 part harmonies. Cole was only 13 years old when he began performing with the band.

Raven And Red combines elements from all of their different musical influences into their songwriting and the songs featured on their new album, ”We Rise Up”, which is set to release in Europe in the spring, on Line Crossing Records.

“We find it difficult to really narrow down our style into one particular genre”, declares Mitchell. “We have so many influences, from John Denver and Jim Croce to Tim O’Brien to classic rock and back to Bach. We are still learning from each other every day and developing our signature sound. This album is one milestone in our musical journey”, he adds.