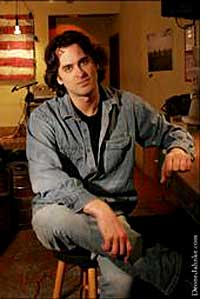 Luminaries of American song have been lining up of late, praising the debut album from an East Nashville singer-songwriter named Peter Cooper. The reasons for that are both simple - it sounds good - and complex. There's something different about this thing.

"Peter Cooper looks at the world with an artist's eye and a human heart and soul. His songs are the work of an original, creative imagination, alive with humour and heartbreak and irony and intelligence, with truth and beauty in the details. Deep stuff. And they get better every time you listen to them." [Kris Kristofferson]

Cooper was five-years-old when he first caught a Kristofferson show. That was on an outdoor stage in Charlotte, NC, not too far from Cooper's hometown of Spartanburg, SC. Something about the experience must have stuck, as Kristofferson's wordplay and folk-inspired melodies became a touchstone. From there, it was on to Tom T. Hall, Mickey Newbury, Bob Dylan, Emmylou Harris, Bobby Bare, Guy Clark, Eric Taylor and others who managed emotional literacy without ever seeming unduly literary. That's a tough trick. Takes a while to learn, and then you have to figure out how to make it into something other than... well, than that same old trick. Reverence and mimicry are close musical cousins that should not marry. Shouldn't even snuggle, really.

"The enticing allure of Nashville is that there is always something new coming down the pike. Put this record on and you'll hear footsteps."
[Tom T. Hall]

When Cooper gathered a collection of his favourite musicians at Nashville's House of David studio - it's a cool place, with a trap door in the floor that was built for Elvis Presley to come in and out without fans realizing he was in town - he sought to create something different. That kind of seeking begins with the songs but it doesn't end there. Check this out: Cautionary Tales isn't a country album, but it has more steel guitar on it than anything released in ages. The steel comes courtesy of co-producer Lloyd Green, perhaps the most famed and important steel man in history. Green played on The Byrds' Sweetheart of the Rodeo, on Charley Pride's In Person: Live From Panther Hall album, and on beloved works by Paul McCartney, Don Williams, Nanci Griffith, Tammy Wynette and a slew of others. From his blistering solo on "All The Way To Heaven" to the staggering beauty of his parts on "Wine" and "Thin Wild Mercury". Green is an elegant revolutionary, reinventing the instrument that he helped to dignify in the first place. He retired in the late 1980s and returned to session playing in the new century, and he has worked in his "second term" with Alan Jackson, Nanci Griffith, Steve Wariner and plenty of chart-toppers. "This album is the most intellectually and emotionally satisfying music I've been a part of since returning to the arena," Green said. "It's like a long lost relative of the Panther Hall album - there's that much steel - and yet it's like nothing I have heard. This one was as special to me as any I've been a part of." Lloyd Green, by the way, has played on more than 100 No. 1 country records.

Todd Snider is not yet a Hall of Fame presence like Kristofferson, Hall or Green, but he is a beacon of invention and originality for a new generation of singer-songwriters. He and Cooper met when Cooper was interviewing him for the Nashville Tennessean newspaper: In addition to his work as a songwriter, Cooper has become one of America's most prominent music journalists, writing for The Tennessean, Esquire, Britannica and No Depression, among others. Snider and Cooper realized they shared ideas and record collections, and they began collaborating. Their "Thin Wild Mercury" was included on Snider's The Devil You Know album, and it won a National Performance Activity Award at the 2006 SESAC Awards, as well as being designated as one of USA Today's "Songs of the Week" and as one of Mojo magazine's "Songs of the Month." Cooper also played bass and sang harmonies on The Devil You Know, he produced Snider's Peace, Love and Anarchy album and he sang and played with Snider on nationally televised shows The Tonight Show with Jay Leno and The Late Show with David Letterman.

In 2006, Snider began pushing Cooper to do a full-length album, something the journalist/musician had put off for years. The two called many of their favourite musicians to record, and the result is Cautionary Tales. Lloyd Green's steel guitar is the album's instrumental centrepiece, but a bevy of greats were there to paint around him. Jason Ringenberg of Jason and the Scorchers played harmonica, Bill Lloyd, known for his work with Foster & Lloyd and as a hit country songwriter, played electric guitar and sang harmonies. Jen Gunderman, formerly of The Jayhawks and currently of Last Train Home, pitched in on piano, Wurlitzer and accordion. Dave Roe, who has toured in the bands of Johnny Cash and Dwight Yoakam, laid down acoustic and electric bass lines, and ace percussionists Pat McInerney and Paul Griffith completed the rhythm section. On a version of the Eric Taylor-penned "Mission Door", Snider, Nanci Griffith and Fayssoux McLean (who provided harmony vocals on some of Emmylou Harris's finest albums) all took verses.