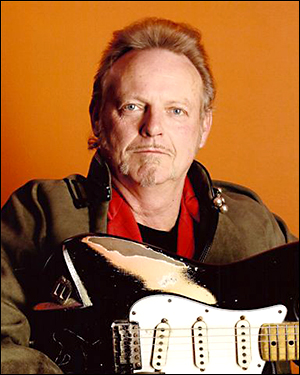 Paul Filipowicz was raised on the radio sounds of Howlin Wolf, Muddy Waters, Sonny Boy Williamson II, Jimmy Reed and everything in between. As a young man he became acquainted with many of the Chicago blues guitar players such as Freddie King, Luther Allison, Lefty Dizz and Brewer Philips. Experiencing a live performance by Otis Rush put him on the path of the west side blues guitar style. Over the years the many late night shows with the likes of Mighty Joe Young, Jimmy Dawkins and Hound Dog Taylor instilled in him the love, reverence authenticity and originality that he is noted for.

Today Paul is a master of the electric blues guitar. His 40 plus years of sweat soaked incendiary no-holds-barred live performances have granted him rave reviews and feature articles in over fifty publications Stateside and in European magazines. Paul’s seven award winning albums are played on the internet, satellite, US radio and internationally. His recordings have charted continuously on the prestigious Living Blues poll. ‘Chinatown’ earned Blues Album Of The Year and Blues Artist Of The Year, and placed him #8 on Real Blues magazine. He even has a blues radio station, on X-M Satellite Radio. Top 20, Texas Blues releases two years in a row in 2003 and 2004, when he was on the Dallas based Gila Monster label.

Paul’s brand new “Saints & Sinners” could be his most compelling work to date. Staying true to originality being the voice of true blues, Paul has penned 11 more moving blues songs which convey his unique perspective on life, liberty, justice and the pursuit of the Complete Saturday Night.

Paul’s gig roster reads like a who’s-who of Midwestern roadhouses and festivals including Buddy Guy's in Chicago to St. Louis, George St Grocery in Jackson, Mississippi, Pearls in Dallas, Texas, and all the way to Ulan Bator, Mongolia.