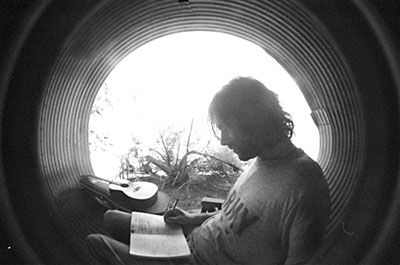 Nico Georis is visionary and poetic musician and one of the most original keyboard players of our times. His musical talents have taken him from Big Sur, to New York, Paris, Romania, and back to the San Francisco Bay area, while carrying on a legacy of California grooves. Nico is a man who is connected to nature’s realm and is dedicated to musically linking listeners to the pulse of life.

“Songs From Nowhere I & II” are Sky Country’s debut home recordings, completely self produced by Nico Georis in his basement of analog relics. Sky Country’s infectious tonal grooves are revealed on an arsenal of vintage keyboards, lush and fuzzy guitars, set atop a warm lo-fi rock'n'roll river bed. Stylistically “Songs From Nowhere” pays homage to the great songwriters and musical craftsmen of the past, while firmly staking its claim to a virgin frontier in new California music.

This is warm California rock'n'roll inspired by the coast and deserts of the western frontier.