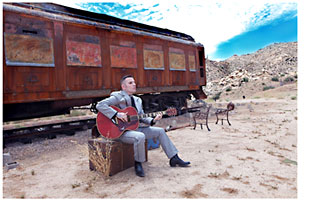 Nick 13 is best known as the singer, songwriter, guitarist and founder of the band Tiger Army. His solo work recalls the vintage American sounds of honky-tonk and classic California country from the middle of the last century with a modern twist. He’s already performed at Stagecoach, Hootenanny and South By Southwest.

“Nick 13 has the timbre of Chris Isaak, the tone of a young Lyle Lovett, with some Elvis and Ricky Nelson mixed in”, wrote The Press Enterprise. CMT declared his music to be “drenched in hillbilly electric guitar and coolness”.

Nick’s debut album for Sugar Hill Records features acoustic and electric guitar, standup bass, pedal steel, fiddle and much more from a wide pedigree of players who connected with 13’s genuine passion, understanding and knowledge of the history of the music and forward-thinking vision for the future. Some of the folks on the album include Lloyd Green, Sara Watkins, Josh Grange, Eddie Perez and Mitch Marine, in addition to the album’s producers Leisz and Intveld.

Nick offered fans a brief preview of his solo work during encores at Tiger Army’s 2009 “Octoberflame II” event, followed by a full unveiling on the Palomino Stage at Stagecoach last year. “Nick 13 paid earnest homage to Merle Haggard and Ray Price, both of whom followed him shortly on the same stage”, wrote the Los Angeles Times.