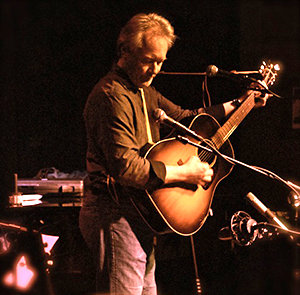 Years passed. Roots rock bands, bluegrass bands, no bands, all came and went. Nelson's solo career started in 2012 with the release of "Still Burning", an album of ten original songs that looked back to his folk music days and elicited great reviews ("..it's poetic, it's melodic, it's timeless", wrote Jean-Jacques Corrio in Le Cri du Coyote, France).

Nelson lives in Seattle, and can be found gigging in the Seattle and Boston areas.

"Orphans & Relics" is an album that captures 9 different corners of American music in 9 tracks. Country blues, rockabilly, traditional jazz, folk revival, electric blues and more - they're all used to frame Nelson's vivid storytelling and melodic craftsmanship. The result is a true Americana album.

The album was recorded on 2 inch analog tape at Prairie Sun Studios in Sonoma County, CA. Nelson and producer Michael Thomas Connolly created a sound that is vintage, alive, and organic - Michael dubbed it dirty Americana. But, whatever it may be called, there's no mistaking the intentionality and passion that jumps out of every track.