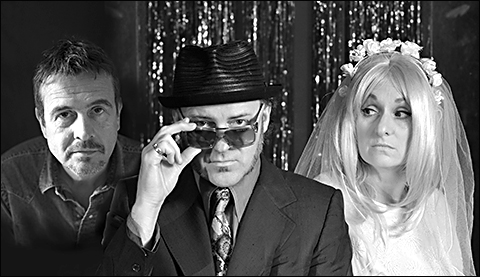 With her best years seemingly behind her, a former Las Vegas showgirl works double shifts in a rundown Memphis bar. Alone and estranged from her daughter, Marcia lives life vicariously through her customers and the everyday tragedies of people falling in and out of love. These are moving tales of grief and heartbreak, lust, murder and domestic horror. Serving beer and burgers as these very different stories unfold, Marcia reflects on her single doomed shot at happiness. Then one day, she receives a phone call that changes everything…..

”The Other Half” is a unique collaboration between the leading lights of mystery fiction and country music. An original story by bestselling crime writer Mark Billingham, soundtracked by the powerful and poignant songs of internationally acclaimed americana duo My Darling Clementine.

Mark Billingham is one of the UK’s most acclaimed and popular crime writers. He has twice won the Theakston's Old Peculier Award for Best Crime Novel, and has also won a Sherlock Award for the Best Detective created by a British writer. Each of his novels featuring detective inspector Tom Thorne has been a Sunday Times bestseller, and ’Sleepyhead’ and ’Scaredy Cat’ were made into a hit television series on Sky 1 in 2010 starring David Morrissey as Thorne. His most recent novel,’Time Of Death’, and ’In The Dark’, published 2008, are being adapted into a series and will air on the BBC in autumn 2016. Mark lives in North London with his wife and two children.

My Darling Clementine are leading lights of the British americana and country music scene who have, to date, released 2 highly acclaimed albums, “How Do You Plead?” (2011) and “The Reconciliation” (2013). Comprising of husband-and-wife duo Michael Weston King and Lou Dalgleish, they have a growing legion of fans, including such famous figures as Graham Norton and Bob Harris. My Darling Clementine mine a rich seam of country classicism, in particular the countrypolitan sound of late 60’s Nashville.