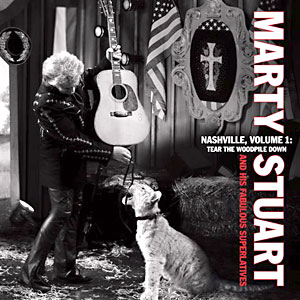 Marty Stuart arrived in Nashville on Labor Day weekend, 1972. “I came to Nashville from the land of Jimmie Rodgers, looking for a place, a place to belong inside the world of country music. It was a country boy Hollywood, the air castle of the South, a dream factory”. 40 years, a decade worth of hits and a full round of hillbilly stardom later, Stuart has hillbilly rocked himself back to the bosom of traditional country music.

“When I reconnected with traditional country music I found myself, my calling”, says Stuart. “The kind that is timeless, beautiful, beyond trend, the empowering force, the reflection of a people and a culture. The kind of country music that the working man and scholars alike call home. The job seemed to be to champion it, love it, protect it, care for its people, attempt to write a new chapter for it and to make sure that everybody understands that it’s alive and well in the 21st century”.

Stuart has done that with his acclaimed collection of country music memorabilia and treasures which currently tours across the country, and with his Marty Stuart Show on RFD TV which provides a platform for some of Nashville’s classic artists to perform on a nationally syndicated program.