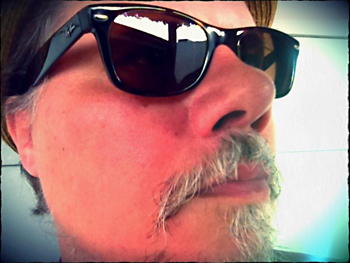 Luke Powers was born in Chattanooga, TN. He attended the McCallie School where he graduated as valedictorian and captain of the wrestling team. He received a Morehead Scholarship to the University of North Carolina at Chapel Hill.

Unlike his other scholars who went into fields such as medicine and law, he chose the more lucrative field of folklore. Luke received a fellowship to Vanderbilt University, where he studied the work of his hero William Blake, and began a band called "The Four Zoas" in Blake's honor.

At a Zoas' gig Luke met Brian Ahern, legendary producer of Emmylou Harris, Johnny Cash and George Jones (among others). Ahern published Luke's songs and introduced him to Tommy Spurlock, producer, musician & steel-guitar wizard. Tommy had produced Rick Danko, David Olney and Chip Taylor — and played with groups including The Band, Leon Russell, Rodney Crowell, to name a few. This odd couple — a college professor and a musical “road dawg” - hit it off immediately. Luke helped Tommy with his next project 'Burrito Deluxe'; Luke wrote songs with Mark Collie and Earl Bud Lee and collaborated with the legendary Sneaky Pete Kleinow of The Flying Burrito Brothers.

In 2005 Spurlock got the idea of writing a protest album — against the US war in Iraq, George W. Bush and the decaying state of the nation in general; Americana music of an America gone horribly wrong. Luke had already written a number of protest songs for the cause and came up with the name: 'Kakistocracy' (meaning government by the least honest or competent). The CD, released on Austin Records, featured Luke and Tommy as The Spicewood Seven with Jamie Oldaker (Eric Clapton, Leon Russell), Rosie Flores, Elana James (Hot Club of Cow Town) and Garth Hudson (of The Band). The effort received high praise.

Luke conjured Garth Hudson into recording on Luke debut CD 'Picture Book' (2007) on Phoebe Claire Records. Garth brought a timeless Band-like swirl of sound to songs like “Knoxville Girl” and “Tommy's Going Home To Texas”. The latter song, written about Tommy's decision to move from Nashville to Austin (and saying goodbye to a dream), brought a tear to Garth's eye during the late night/early morning session. Luke admits, “it's the highest praise I could ever imagine”.

Luke decided to follow up his “personal” album with a more abstract concept with his CD 'Texasee'. Luke wanted to evoke a mythic American landscape littered with the remains of love and violence — Sam Peckinpah, the Coen Brothers and a little Cormac McCarthy thrown in for good measure. Since Spurlock had now relocated to Austin and Luke was in Nashville, the name was more than simple geography. The project also began Luke's long-time collaboration with engineer extraordinaire Bradley Hartman (Emmylou Harris, Willie Nelson).

He continued to expand his range and reputation with the well-received albums 'Running To Paradise' - the title borrowed from W. B. Yeats. This was Luke's offbeat “religious album” featuring the song “Johnny Rotten Come To Jesus” which he performed live on Knoxville's WDVX at the invitation of DJ Wayne Bledsoe.

The follow-up, 'HWY 100' (2010) delved further into Southern Gothic Americana with songs like “The Ballad Of The Minie-Ball” (a true story in which a ricochet bullet impregnated a southern belle) and “World's Smallest Confederate Veteran” (a sideshow midget, with uniform and pointed beard, astride on a shetland pony).

The CD is a concept album about Memphis (and the decline and fall of the American dream) and Mermaids (the miracles all around us that transcend that fall). The mermaids take the form of literal mermaids in the Mississippi to a transgender tween at the brink of puberty to Picasso's "Girl With Mandolin".

There is also a song about the Mayan Calendar ("Last Day Of The World") - hopefully the song will get some listens before the world ends next month, but at least, Luke say, "I'm going out with a bang!".