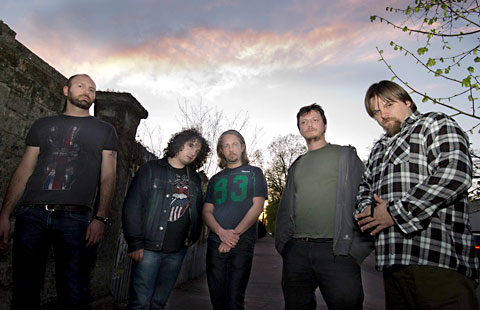 Lowlands are a rock band, formed in Pavia, Italy, by British born singer-songwriter Edward Abbiati. Hard to pigeonhole, their eclectic sound (a powerful mix of electric and acoustic guitars, piano, accordion, violin, bass and drums) has been compared to such diverse groups as Wilco, Whiskeytown, Soul Asylum and Green On Red. “Roots on the inside and grunge on the outside”, according to one review.

Since breaking onto the European roots rock scene with their debut album, “The Last Call” in 2008 to strong reviews, Lowlands have recorded two further albums – “Gypsy Child” (2010), which featured duets with Amanda Shires and Tim Rogers (You Am I) and was mixed by Chris Cacavas and the forthcoming “Beyond” (2012), produced by Joey Huffman (Soul Asylum), as well as three EPs – “EP Vol 1” (2009) and two download only live recordings - “Radio & Kitchen Sessions” (2010) and “Live in Newport” (2011).

In 2010, Lowlands (featuring Chris Cacavas) contributed a stirring version of “Soul Driver” to the Italian Bruce Springsteen tribute album “For You 2” produced by Ermanno Labianca. A touching cover of the Beatles’ classic “In My Life” was released in 2010 on the tribute album “A Day In The Life”, a celebration of the life of John Lennon and of the Pavia music scene.

In 2011, the band backed Hebridean Folk duo Donald and Jen MacNeill on their album “Fathers & Sons” and have recently recorded (as “Lowlands and Friends”) a Woody Guthrie tribute album – “Better World Coming”, which is only for sale on their website and at their live shows.

Lowlands have toured extensively, both in Italy and abroad, playing clubs, small theatres and festivals (as well as a few jails and a church!).