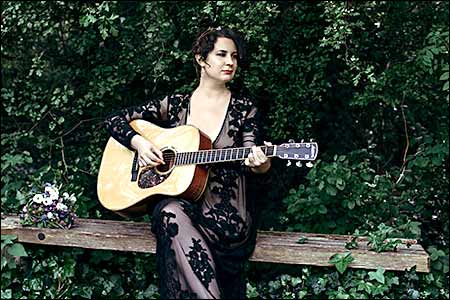 “In her gentle, modest way Kyle Carey represents both a well traveled path, but also an innovation” ~ Celtic Beat Magazine

Possessed of an elegant grace, on ”The Art Of Forgetting” Kyle Carey weaves together resonant threads of Celtic and American roots music into a rich tapestry of acoustic storytelling. Produced by 4 time Grammy winner Dirk Powell, the album unites an all star international cast of musicians, Louisiana’s Sam Broussard on guitar, Scotland’s John McCusker on fiddle, the Netherlands’ Ron Janssen on octave mandolin, Nashville’s Kai Welch on trumpet, Ireland’s Mike McGoldrick on flute, and North Carolina’s Rhiannon Giddens on backing vocals. Powell, one of the world’s leading experts on traditional fiddle and banjo styles, particularly Cajun, lends his particular skills as well.

Carey’s own story is as worldly as her music, raised by her schoolteacher parents first in the Alaskan Bush, where she heard Yup’ik Eskimo spoken as often as she heard English, and then in rural New Hampshire. She studied literature in college, and then travelled to Cape Breton Island, Nova Scotia, on a Fulbright Fellowship to begin her study of the Gaelic language and its music. Carey is one of those scarce as hen’s teeth Irish Americans fluent in the language of her ancestors.

That was followed by a 2 year sojourn on the Isle of Skye, there she cemented her command of the Gaelic language and fell under the tutelage of Christine Primrose, a native of nearby Lewis and one of Scotland’s most revered traditional singers. From Primrose she learned the secrets of pronunciation and tone that distinguish those who sing from the deep heart of that music.

Carey has showcased that style in the traditional Gaelic songs, 2 on each album, that have graced her previous CD’s and also this 3rd one. Her 2011 debut, ”Monongah was recorded in western Ireland and produced by Donogh Hennesy of the acoustic super group Lùnasa. ”North Star”, released in 2014, was recorded this time in Scotland, and was produced by Seamus Egan, a founding member of Solas.

In her original material, however, she breaks new ground in her ability to make that style the pulse of a new American sort of folk music. The essence of that revolution lies in the real distinction Carey draws between Celtic Americana, i.e. the well traveled path of American musicians performing in the style of traditional Celtic music, and the Gaelic Americana that she writes and performs. Her music is innovative not only in its bone deep feel for Celtic tradition, but in all that she is able to graft on to it by way of a personal vision as capacious as the North American continent.

The Americana portion of this synthesis has been plucked variously from bluegrass, gospel, and Appalachian ballads and fiddle tunes, in the lyrics from personal experience, Appalachian folktale, Dustbowl narrative, the Old and New Testaments, Greek mythology, and the rough hewn poetry of West Virginia’s Louise McNeill.

Celtic Beat has noted that some Celtic purists have found Carey’s Gaelic Americana upsetting, which is good, as ’that is what makes her such a valuable artist’. A spokesman for the World Music Network, which will be distributing The Art of Forgetting, entirely agrees, ’Carey represents the true vision of a transatlantic artist’.

There may well be a well travelled path for folk music in these transatlantic lanes, but no one has done it like Carey, to shift into reverse, to go back to the graves of her ancestors, to learn the language they spoke, the songs they sang, and to use this knowledge in creating a new sort of American folk music, one that continues to cross boundaries, to forge alliances.

“Take the North Star for your journey”, Carey sings in that duet with Rhiannon Giddens. She has done so, and it has brought her, and her audience, to this, her 3rd release, and the most fully wrought realization of her vision.