King Of The Tramps 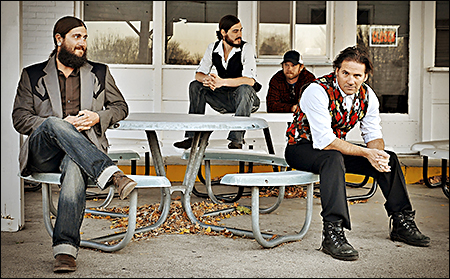 King Of The Tramps is an original roots rock group, whose sound calls upon influences from modern roots rock, rhythm and blues, rock and southern country rock. Their sound has been described as “whiskey gospel” and “midwestern roots rock” by critics. The band has released 4 albums of original music, “Good People” in 2011, “Wicked Mountain” in 2013, "Joyful Noise" in 2014 and "Cumplir Con El Diablo" in 2016.

King Of The Tramps live show is a foot stompin’, hand clappin’ rock and roll gospel, with plenty of crowd participation. According to City View writer Chad Taylor, "Todd Partridge is part troubadour, part tent revival preacher, Partridge holds court over his audience, welcoming all to the Tramps roots rock and jam band sound with the charisma of a faith healer”.

The band takes its name from the spirit of the golden days when hobos and itinerants roamed the US, many in search of work and some just feeling the freedom of traveling a beautiful young and wide open country. Woody Guthrie most famously represented the image of the independent traveling troubadour, fighting for downtrodden individuals and singing picturesque songs about the beauty he saw from the door of a boxcar.

King Of The Tramps takes its name from a lesser known rail legend, Tex, king of the tramps. Tex rode the rails across the US in the 1930’s and 1940’s, often leaving his mark “Tex K.T.” carved into bridges, fences and buildings across the US.