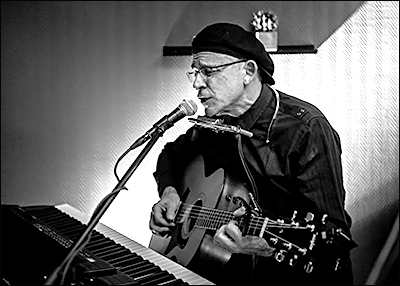 Born in New York City and raised across the river in Fort Lee, New Jersey, Kenny White began his career in the 1970's, touring exclusively as the keyboard player for Jonathan Edwards and Livingston Taylor. He then became a fixture in the New York City studio scene throughout the 1980's and 1990's, producing and arranging literally hundreds of commercials for TV and radio. Commercial work enabled White to direct artists as renowned and varied as Gladys Knight, Linda Ronstadt, Mavis Staples, Ricky Skaggs, and Aaron Neville White worked on many film soundtracks as a contributing writer and musician including "Message In A Bottle", Kenny also appears on dozens of recordings of other musicians, including Marc Cohn’s platinum debut album.

Astonished audiences often ask Kenny after a live performance, “how come I’ve never heard of you?”, when in fact, the pianist, singer, songwriter, producer and arranger has been very well known in the New York recording scene for decades. He comes to the world of the touring singer songwriter following a long and successful musical journey. "Long List Of Priors", his aptly named new album, is the latest collection of original songs, indelible snapshots of the human condition, from heart wrenching to hilarious and observed with the precision of a diamond cutter. As on his past recordings, Kenny White’s work in the studio enabled him to assemble a who’s who of musicians and guest artists, including David Crosby, Peter Wolf, Larry Campbell, Amy Helm and Catherine Russell, along with his regular band featuring the dexterous Duke Levine on guitar, shape shifting Shawn Pelton on drums, and the masterful Marty Ballou on bass. Now add the horns, strings, and other surprising arrangements, and "Long List Of Priors" is a refreshingly original and multi layered singer songwriter recording.

He still, from time to time, tours with Judy Collins throughout North America and performs the duet “Veterans’ Day” on her recent "Bohemian" CD. He often shares a stage with his good friend Cheryl Wheeler, appearing on her live recording, "Greetings", which he also produced. And though he has all but given up his days as a sideman, in 2014, he accepted an offer by none other than Tom Jones to play in his soul quartet for a sold out, 3 week US tour.