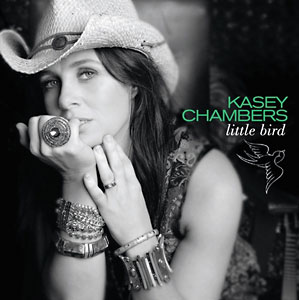 Sugar Hill Records is excited to announce the July 12th release of 'Little Bird' from one of Australia’s most accomplished singer-songwriters, Kasey Chambers. The 14 song collection – her first solo project in four years - is the result of an outpouring of new material from Kasey written within a hectic two week period in February of 2010, and Chambers is confident in calling 'Little Bird' the best recording of her career.

“These guys are some of my favorite musicians and singers, including the backbone of my touring band, so there is a familiarity and intuitive understanding of where this music should go”, says Kasey. Nothing in the recording process sounds forced or labored; every track sounds fresh, positive, exciting. “When the songs are that fresh, there’s something magical about taking them into the studio and bringing them to life, right then and there”.

The new album, which is already certified Gold in Australia, represents a diverse spread of musical styles from Kasey’s glittering career, which has reaped multiple ARIA and APRA awards, number one hits and multi-platinum sales in Australia and around the world.

Despite the upbeat and optimistic vibe of 'Little Bird', Kasey notes that it also reflects on a young woman’s insecurities. “I started remembering how I felt when I wrote ‘Not Pretty Enough’ and comparing it to how I feel now. I was wondering how that sentiment would come out if I revisited it”, says Kasey. “I still have moments like that, of feeling insecure and unsure, but I feel differently about that now. I feel stronger and more powerful, not willing to compromise so much. This record is like the strong, secure version of ‘Not Pretty Enough’.”

Kasey excitedly rates 'Little Bird' as the best recording of her career. “I don’t think I’ve ever been so excited by a bunch of songs. They all came out completely differently. I was back in that same frame of mind that I had for the early albums. And it made me feel so confident. I was so absolutely in love with all these songs, I could not wait to make them come to life”.