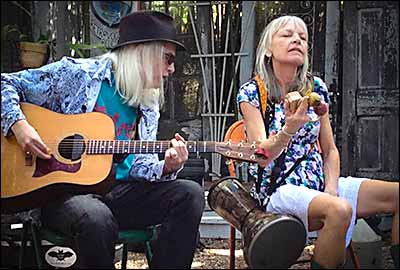 US label Berkalin Records is proud to announce the June 2018 European release of "The Hard Part Of Flying", a new album from the Austin, TX, folk and americana duo Jim Patton and Sherry Brokus. Building on the momentum of their last album, "The Great Unknown", named one of 2013’s top 100 CDs by Geoffrey Himes in Paste Magazine, the duo has teamed up with producer Ron Flynt for the 4th straight time to deliver their strongest writing and singing yet. Once the album is released, Patton and Brokus will support it with live shows in Europe.

Patton’s new songs not only provide a back and forth with Brokus on vocals, with Brokus taking a larger role than usual, but the songs create a back and forth between Austin, their home for over 20 years, and their Maryland home before that. John Conquest said in 3rd Coast Music, “The Baltimore rootedness gives their latest real strength”.

Producer Flynt has crafted ingenious acoustic and electric arrangements that keep Patton’s acoustic guitar, Brokus’s hand percussion and the duo’s voices out front, while subtly reinforcing them with bass and keyboards. The result is a sound that closely resembles the duo’s live shows, where the lanky, silver haired Patton sits next to the petite, dark haired Brokus and showcase the lyrics that are the key to the act’s appeal. Even at house concerts and folk clubs, however, the duo often brings along an extra musician to embellish the songs, and that's the feel of the record as well. Providing that enhancement on "The Hard Part Of Flying" are bassist and keyboardist Ron Flynt, acoustic guitarist and multi instrumentalist Rich Brotherton, fiddler Warren Hood, and acoustic guitarist and mandolinist Marvin Dykhuis, with guest appearances from lead guitarist Mary Cutrufello, cellist Julie Carter, guitarist Scrappy Jud Newcomb, and percussionist John Bush.