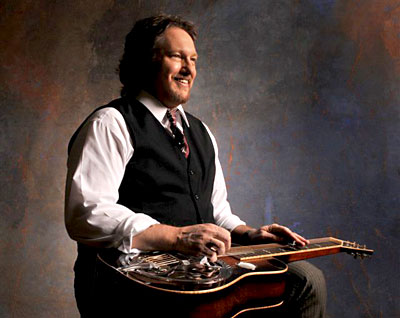 Recorded in Nashville, New Orleans, New York and Banbury, UK, "Traveler" was produced by Russ Titelman. Songs include versions of Paul Simon’s “The Boxer” and “American Tune”, as well as several original tunes from Douglas. Of special note is Douglas’ rendition of the Leadbelly classic “On A Monday”, which marks his lead vocal debut.

Internationally recognized as the world’s most renowned dobro player, Douglas ranks among the top contemporary artists in American music. Douglas has garnered thirteen Grammy Awards while holding the distinction of being named 'Musician Of The Year' by The Country Music Association (2002, 2005 and 2007), The Academy Of Country Music (11 times), and The Americana Music Association (2002 and 2003), as well as numerous International Bluegrass Music Association awards. Douglas is the recipient of a Lifetime Achievement Award from The Americana Music Association, and was honored as the 2008 'Artist In Residence' at the Country Music Hall of Fame in Nashville, TN. In 2004, the National Endowment for The Arts honored Douglas with a National Heritage Fellowship, acknowledging his artistic excellence and contribution to the nation's traditional arts, their highest such accolade.