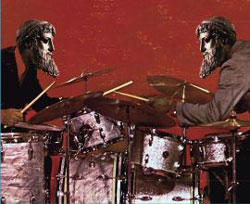 "Decline of the West" represents a vital intersection of style and method in Emil Amos' songwriting and production. The record combines his genre-hopping tendencies and no-rules mixing methods with the more hook-driven, straight-to-the-jugular phrasing that he has been honing over the last several albums. This makes "Decline.." his most stylistically varied effort to date while balancing a perfect mix of his more challenging sentiments with bigger hooks.

Holy SonsHolySons has existed in obscurity for 15 years now. Listeners have only heard of the project through word of mouth. Any and all attempts to make HolySons a more palatable, commodifiable 'music act' for a larger audience have been foiled by one hurtling asteroid or another. Most of the asteroids have been thrown by it's creator. The project remains to be a wormhole into the inner world of E.Amos who produces and plays all holysons music. Each HolySons album has a different sonic identity; experimenting with mutiple genres and recording formats. Each record meditates on a different aspect of a mind immersed in the attempt to appreciate life and the obsession with the failure to do so. E.Amos began home recording at the end of the 80's with his high-school hardcore band. Hardcore's commitment to it's own language of individualism, freedom, inner-strength, rebellion and radical no-rules expressionism formed the basis of HolySons' artistic template.

"Decline of the West" is named after and conceptually began with Oswald Spengler's pessimistic assessment that the Western culture is revealing the classic signs of a societies' decay and end. The record was recorded at Amos' home studio in late-night recording sessions that stretched over 3 years where he played every instrument and then mixed and re-mixed each track. Influenced by the avant German bands of the 70's he used nature recordings, radio transmissions and old Halloween tapes as source material to create slabs of musique concrete-style texture to surround and inhabit the songs. The basic message is an apocalyptic one, with the songs investigating the tensions between 'human nature', capitalistic culture, conformism, the inner self and the inevitable destiny of a society that has values such as ours. The record's production takes Holy Sons' minimalist avant-folk sound and journeys through formats as varied as dub, church-hymn, slow-jam, tape-collage and paranoid beats over-run by obtuse banjo-sitar runs... all performed with an inspired punk spirit.