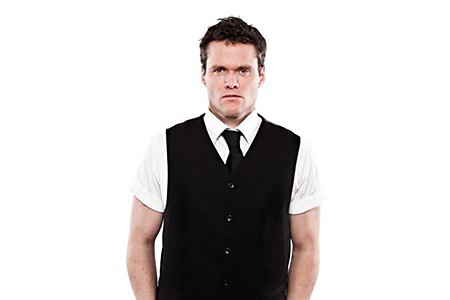 Born in Hamilton, Ontario, and raised on his family farm in Bancroft, Ontario, Gordie Tentrees has spent the past 15 years working on his craft while hiding out in Whitehorse, Yukon.

After spending most of his young adult years struggling with the e!ects of being raised in a violent home, Tentrees redirected his energy into sport, theatre and dance, channeling every negative into a positive, and excelling as an amateur boxer (he’s a three-time Golden Glove champion).

“I realized I was going to carve my own way early on, and the only person deciding where I ended up was going to be me”, he says. Honing his determination, Tentrees became a school teacher, youth worker, counselor, coach and mentor for at-risk kids. “It never felt like work, and I feel
grateful to call these kids my friends”.

At age 25, Tentrees wrote his first song and learned his first guitar chord, eventually graduating to dobro and harmonica, touring and recording. His first three albums are narratives that chronicle his difficult past – the gritty characters in his life and his relationship with the dark. His music is his own blend of folk, roots and blues sounds, and Tentrees counts Rick Fines and Fred Eaglesmith as heroes and strong influences in his songwriting.

Tentrees earned a 'Western Canadian Music Award Album Of The Year' nomination for "Mercy Or Sin", performed at the 'Best Of Canada Vancouver Olympics' concert, and was a finalist in the 'International Song Competition' out of 15,000 entries in the Americana category. Competition judges included Tom Waits, Loretta Lynn and Jerry Lee Lewis. The rave reviews starting pouring in and Tentrees’ reputation as one of Canada’s hardest touring musicians began.

Never one to give less, Tentrees started booking his own tours, averaging 200 concerts a year, all while promoting his own shows, tracking his own records, and acting as his own publicist. Tentrees learned the business while growing as an artist, pushing himself to continue to succeed.

“I know I’m not a musician, writer or performer yet, that I’m still just starting. People assume I am or have done something, but that’s not even close.”

However, over the past three years, Tentrees has accomplished much ;

- Secured a US publishing deal with Bluewater

- Capped off 2012 with a world tour of 140 concerts in 148 days that spanned Canada, the US, continental Europe, the UK and Scandanavia

These days he’s performing solo and with his band, Hill Country News, and is gaining a reputation for both his dynamic solo shows and full band concerts, which range from storytelling folk rants to swampy high-energy dirges.

“I feel so damn lucky every night that I am allowed to do this, and am more motivated than ever to learn from it”.