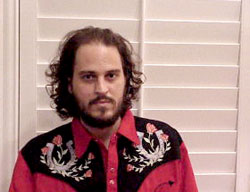 Born out of Michigan in the winter of 1969, Faris Nourallah moved as a child with his family to Texas, the Lone Star State. He grew up listening the likes of Clash, Beatles and Elvis Costello, and soon he's involved in playing music along with his brother Salim. They formed the ' Nourallah Brothers ' , and their first and only album saw the light on the indie USA label Western Vinyl. Then, he started touring through the US supporting that collection of songs. But something went wrong and the group disbaned.

Then, Faris stopped to go places. In the inner of his house, he began to write solo songs and to go places through them. That places are drawn in three albums , three 'chapters' of Faris' lifebook. Here starts the story.FarisCritic was immediatly hitted by his ability to put down songs of diasrming beauty as the ones included in ' I love Faris ', the debut solo album. The stone was thrown in the open water and the waves started to spread. Then was the time of 'Problematico' , that signs the begin of the artistic relationship with visual artist Paco Felici , who nails his first artwork on an Nourallah's album. The same was for 'King of Sweden'. With this record, Faris' name landed strongly in Europe too, where his music became a sort of 'must' for the indie lovers. Critic points at Faris as one of the smartest songwriter around, comparing him to the likes of Ray Davis, John Lennon and Plush and his records' feeling to literary milestones like ' Catcher in the Rye '. The myth creeps more and more...But mainly, people loves Faris. People declared the man and his music to be precious jewels to take care of.

Now, the fourth chapter of Faris' saga is ready to be glanched. Played, recorded and mixed all by himself in the inner of his house, " Il suo cuore di transistor " found a winning shot in the final mastering carried out at GoldenMastering Studios (Ventura,CA) by "JJ" Golden, the man behind other great records of great artists such us Calexico, Rachel's, Mark Kozelek, Swearing at Motorists and others.

On graphic side, the front/back cover has been handpainted by the talented and multilingual (!) Paco Felici basing on the concept of the record and realized through the Paco's loved theme of the 'robot'. An impressive and unique touch to enrich the new stunning collection of songs. Furthermore, for the first time ever, you'd read the 'transistor heart' words on a booklet.

In this scenario , the great mock 'disco' tunes of tracks like ' Black Car ' and ' But Not Tomorrow ' , the masterly brush-strokes of piano of ' Don't kiss ' or ' Tell me Secrets ', the suspended surroundings of tracks like ' Break Your Vows ' or the Lennonesque jewels like ' Move On ' and ' Raining ', are embellished by Faris' strongest vocals ever.