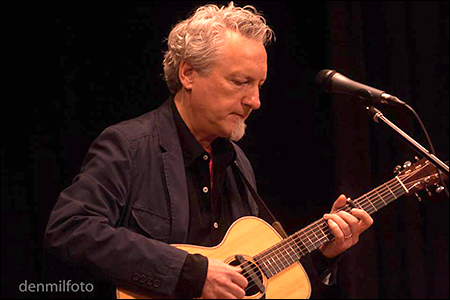 Ernest Troost is an Emmy Award-winning film and television composer and also a recipient of the prestigious Kerrville New Folk award for his songwriting. He also composed and produced two award-winning albums of songs for Judy Collins using the words of Emily Dickinson, Robert Browning, Gertrude Stein and others. Los Angeles-based Troost’s scores for films include the cult classic 'Tremors' and HBO’s award-winning 'Lesson Before Dying'.

In Troost’s stunning new album, "O Love", he turns his attention to love songs, and by adding electric guitar and drums to his well-known folk and Piedmont stylings, he’s created his most powerfully dramatic album to date. From the tortured father-son relationship of “Old Screen Door”, or the fragmented images of “O Love”, to the simple grace of “Close,” Troost’s songs linger in your mind like a loving memory or a terrifying nightmare.

As always, Troost’s songs are rooted in character, situation and narrative, and are adroitly layered to present what FolkWorks called “a broad and colorful canvas of Americana”. A fine example of the darker side explored on this record is the hard-rockin’ “Old Screen Door”, where Troost sings, “There was blood on the handrail and some on the floor/This house was my home, but it ain’t no more”. Yet, all’s right with the world in “All I Ever Wanted,” where he sings, “I spoke in tongues at an old revival show/I chased the devil down where no one else would go/There ain’t nothin’ else I crave, whether I’m lost or whether I’m saved/'Cause all I ever wanted was you”.

Here’s a collection of love songs that will draw you in and ask you to reflect on love’s many guises.