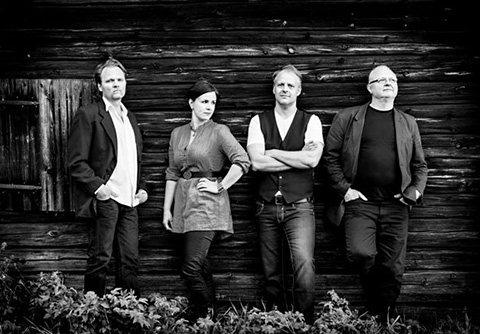 We are proud to announce the release of Swedish folk-pop-rockers Eastwick’s second album ”Beyond Reason”, co-produced by Gustav Hylén (awarded a Swedish ”Grammis” for his work with Groupa).

The tounge-in-cheek lyrics pack a political punch, dealing with the spectre of poverty, bigotry, religious and economical fascism, and the general bat-shit craziness of the world today, but any vitriol is counterbalanced by catchy melodies and a bouncy, life-affirming production.

”Music and politcs combined can be pretty dicey stuff”, admits singer Jens Ganman. ”But we have opinions about things, you know? And we think it’s important to stand up for something, especially these days, when so many people are sitting down, faces glued to Facebook, Twitter and their smart-phones. But hey, all pretentiousness aside we’re a happy bunch. Music is supposed to be fun above all. Heck, we did a cover of Aerosmith’s 'Dude Looks Like A Lady' on our first album…”

Hailing from the Northern parts of Sweden, Eastwick consists of four very different musicians. Citing such separate influences as U2, Def Leppard, John Mellencamp, Willie Nile, Hooters, Robert Fripp and Stanley Brothers, they manage to blend their efforts into something truly original.

"We're eclectic in the sense that we're totally unhip", says cellist Katarina Åhlén. "So anything we like, we'll toss in to the mix, regardless of its street credibility. Like most cellists I'm a huge fan of Rostropovitj and Jaqueline Du Pre, but I'm probably more influenced by bands like Gun, Little Angels and Def Leppard, so I'm an 80's fan. Flat out. Let it be known".

Fiddler Peter Roos fills in: "The older you get the less you care about how things are 'supposed' to be played. Or perceived. If a song makes you feel good - well, good for you! Don't fret about if it's in 'poor taste'. There is no poor taste. Just people with a less developed sense of humor!"

"I like ballads", muses guitarist-accordion player Bo Lindberg. "Big, bombastic power ballads. I see nothing wrong with that".