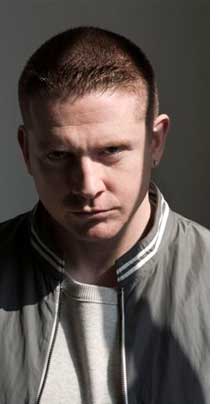 Damien Dempsey is from Donaghmede on Dublin's Northside. His earliest musical influences were the post-pub singsongs that his parents used to have at their home when he was a toddler. Good, bad or indifferent, everyone had to sing. Today his unique sound reflects the influence of traditional Sean-Nós as well as his musical heroes: Bob Marley and Elvis Presley.

After completing his secondary education Damien went on to the Ballyfermot "Rock School" for 2 years where he studied musical performance as well as the practical side of the music industry. The school had its own small record label and star students were awarded a release on the label. Damien was chosen for that honour and the EP, "The Contender", was released in 1995.

In 1997 "Dublin Town", Damien's first commercial single, reached No. 18 in the Irish charts. Ireland's HOT PRESS remarked that it was "..an underground anthem for disaffected youth and closet balladeer alike". A re-recorded version of the song appeared on Damien's first album; "They Don't Teach This Shit In School" released in 2000.

His next release, the "Negative Vibes EP", (2002) featured Sinéad O'Connor on the title track and led to an invitation to support Sinéad on her 2002/2003 Irish, UK and European tour.
Damien's second album, "Seize the Day", was released May 2003 in Ireland on Clear Records via Sony and entered the charts first week of release at No. 5. It has since achieved double-platinum sales. Released in May 2004 in the UK on IRL, the album was awarded "CD of the Week" in the Sunday Times and received enthusiastic reviews in the National and music press.

Nominated in 4 categories in the 2004 Irish Meteor Awards, Damien walked away with two, the only 2004 double winner. A documentary, "It's All Good: The Damien Dempsey Story" by independent filmmaker Dara McCluskey, that followed Damien's career progression up to the release of "Seize the Day", was broadcast on Ireland's national TV station RTE and shown at film festivals in Ireland and New York.

During 2004 Damien toured extensively headlining his own shows as well as supporting Bob Dylan during the Irish leg of his European tour and making his debut appearances at The Fleadh and Womad.
Damien has earned the passionate support of his peers, one of whom is Morrissey who invited Damien to support him on various UK and Irish dates as well as his autumn 2004 US tour. Morrissey went on to sign Damien to his Attack label, and "Seize the Day" had its U.S. release in October 2004.

His third album, "Shots", simultaneously released in Ireland and the UK in March 2005, entered the Irish album charts at Number 1 and achieved platinum status in December 2005. The album was also released in the U.S. on United for Opportunity Records in June 2006 and Damien undertook a coast to coast tour.

In February 2006 Damien increased his Meteor Awards by winning in The Best Irish Male category. Recorded in December 2005 at Dublin's Olympia Theatre and released in June 2006 in both Ireland and the UK, Damien's first live album, "Live at The Olympia", entered the Irish album chart at Number 10. For the second year in a row Damien won Best Irish Male at the 2007 Meteor Awards.

His new album, "To Hell or Barbados", released world-wide in June 2007, entered the Irish album chart at Number 2.