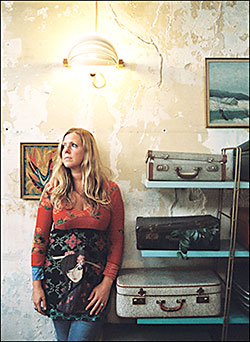 Still taking her dark lyrical cues from the likes of Leonard Cohen, this album offers a brighter tone than her previous releases, only hinting at the melancholy, but maintaining its soul and warmth, noticeably the song 'Generation Next' is inspired by the younger artists moving up through the musicalranks in Bristol, a journey Daisy took herself when she moved to the city 19 years ago.

Daisy continues to draw on both experience and history to form her stories, from the tragedy of Idilia Dubb (a girl who met her fate trapped up a tower in 1851), to the poignant reminiscence of old England in ”I Used To Own An Empire”.

The album took longer than usual to record, mostly due to the fact she gave birth to a daughter in May 2016, but this didn't stop her working hard. She toured round Europe for a month with progrockers Crippled Black Phoenix, and another month with her European quartet The Songbirds Collective, all whilst heavily pregnant.

And later this year, Daisy will be travelling with them to Taiwan, taking her music further afield than ever before. Expect beautiful music and harmony from its purest form, to its most voluminous as Daisy certainly knows how to craft a song and arrange the instrumentation, so that the listener is constantly engaged.