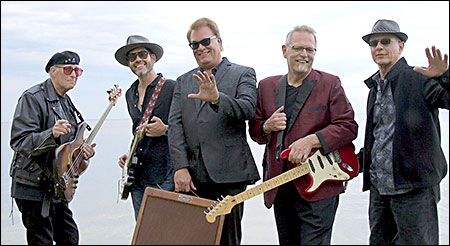 The Backtrack Blues Band is one of Florida's longest running and most accomplished blues bands. Founded in 1980, the group has performed continuously for way over 30 years. Backtrack's high energy Chicago style blues with exceptional guitar, harp, and vocals, has made the band a constant on the Florida blues concert, club, and festival scene for soon 4 decades.

The quintet consists of Sonny Charles on harmonica and vocals, Kid Royal on lead guitar and vocals, Little Johnny Walter on rhythm guitar and vocals, Stick Davis on bass, and Joe Bencomo on drums. Backtrack has appeared as an opening act in concert with many legendary blues artists including BB King, Stevie Ray Vaughan, Buddy Guy, Gregg Allman, Robert Cray, Johnny Winter, Kenny Wayne Shepherd, and many others. The group has also been recognized by the Tampa Bay community as a leader in the blues music arena by garnering 3 Tampa Bay Music Awards as the area's ’Best Blues Band’.

Together, these guys comprise one of Florida's best and most accomplished blues bands, and their live show is an original and exciting display of electric blues at its very best. The band's leader has significant experience in producing top quality blues music shows, having founded and managed the award winning Tampa Bay Blues Festival for over 20 years.

New CD/DVD set, ”Make My Home In Florida”, to be released real soon.