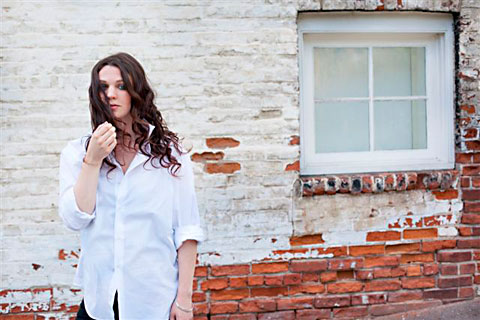 Amelia Curran is a seeker. Nearly a decade ago she left St John’s for Halifax, but still pines for Newfoundland every single day. With a number of East Coast Music Award nominations and an extensive discography, including: 'War Brides' (2006), 'Lullaby For Barflies' (2002), 'Trip Down Little Road' (2001) and 'Barricade' (2000), Curran knew it was finally time to make a record at home.

Over the past two years she recorded with Don Ellis in various caverns in St John’s, the city of legends, from the abandoned CBC building on Duckworth Street to an old farm house on the fringes of town. For Curran St John’s captures the essence of her inner huntress.

A songwriter by trade, but a writer at heart, Curran believes language is everything. She describes the craft of song-writing as an act of “expressing the inexpressible, a means of describing the indescribable”.

“Bye Bye Montreal” could pay homage to Leonard Cohen and the thriving arts scene of yesteryear, but that’s the beauty of Curran. She never explicitly says what her songs about. She just opens the door and allows room for various interpretations and relationships. “All Hands On A Grain Of Sand” speaks to Curran’s ability to elevate the lyrical into the poetical. Her desire to reconcile the past and move into the future is a constant struggle.

“Ah Me” manifests biblical myths into self-reflexive epiphanies, while “The Mistress” is part confession, part obsession. A narrative-driven internal contention of what it means to be the other woman. “Mad World, Outlive Me” mines for the truth and untouchable gems held deep within the soul. With splashes of folk and cabaret aesthetics, “The Company Store” wades through a lost way of life. “Julia” turns the page on a bleeding heart, while “Tiny Glass Houses” shatters expectations and rebuilds the broken places within us all. “The Dozens” is a toe-tapping rendition of harnessing one’s inner lover.

Retribution arrives in both “Love’s Lost Regard” and “Wrecking Ball”, but it’s the album’s closer, “Last Call” that leaves listeners thirsty for another round.